2021 started with the tail end of the pandemic and as such it began a few weeks later than usual, and without any pre-season training. Other than that, it was pretty much as normal although the number of injuries picked up by players, due to months of inactivity resulting from various restrictions, was notably greater than in previous years. With all returning from the shortened 2020 season, and a number of new players added to the squads, the club was again able to field 3 adult teams. As ever, the Mavericks represented the club in BBF-AA, whilst the Millers and the Gold Cats represented the club in BBF-A. Again the divisions were split to help reduce travel, and so all teams came up against many of their traditional opponents.

For the first time ever, one of the 3 teams was comprised solely of players who had come through the clubs junior programme (aside from some player-coaches). The Gold Cats had 15 players aged 18 or under with half the number under 16. Despite being on occasions outmatched in the power dept, they only missed the play-offs on the last day of the season.  Jack Burdett lead the team at the plate with an impressive .880 avg and a 2.031 OPS, whilst the pitching was lead by Kimi Hope (43 k’s) and Hamish Carle (5.10 ERA). The other Single-A team, the Millers, although more mature in years, actually had less baseball experience, as they fielded 8 of the 12 rookies during the course of the season, and despite some early season blowouts, were more than holding their own by the end of the season. Sam Beckwith and Lee Bessent both lead the way with the bat, hitting over .500, whilst Mike Payne (51 IP 73 K’s and all 4 wins for the team) carried the Millers on his pitching shoulders, and with some help from rookie Oliver Wong, in the second half of the season (25 K’s, 12.05 ERA).

In Double-A, the Mavericks found themselves in the middle of a divsion that split into thirds, with 2 teams fighting it out at the top; two more at the bottom, and the Mavericks and the Musketeers comfortably in mid-table. They also fielded the smallest squad of the 3 teams, with just 14 players, from which they had to play 7 inning doubleheaders every week (the same as is asked of MLB players). However, they were competitive every week, and even pushed the league leading teams, taking one game off Croydon, whilst pushing them close 3 times, in narrow 1 one run losses. They also came close against the Sidewinders, again with a couple of very narrow losses, although that team was the class of the division, only dropping 2 games all season. Martin Visser and Diego Ansorena lead the way at the plate, whilst Yasu Minowa continues to hold the years at bay, with a 5.06 ERA and 4 wins, but ably supported by Lewis Bawden (91 K’s and 4 wins).

Off the field, the developemnt of the new facility at Kings College, was held up due to restrictions imposed over the last 2 years, but despite this, it is still anticipated to go ahead in 2022. With the club continuing to grow on the adult side, and a possible move to 4 teams, having 2 diamonds becomes even more imperative, so as not to stunt this expansion. The youth programme did not see the same growth as the adult programme, and in fact contracted in size, but this is more than likely due to not only juniors aging out and being promoted to the adult teams, but also the clubs coaches being prevented from running introductory sessions, as many schools shut themselves off to outdoor sports for the duration. Despite these challenges, the future is still bright, and hopefully 2022 brings a return to normality. 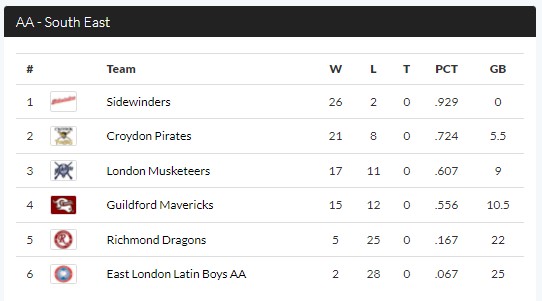 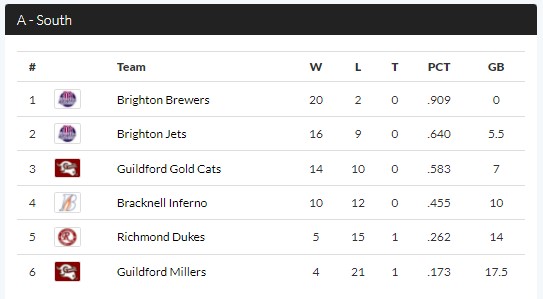