The 2010 season, saw the Mavericks playing in the BBF Single-A south, Pool B, alongside Bracknell, Richmond, Southampton and Tonbridge, whilst Pool B was made up of BRaintree, Chelmsford, Herts Raptors, London Maruaders and the Old Timers. The BBF that season had 20 AA teams, 13 AAA teams and a National League of 8 teams, predominantly based in the south. Not only was the club starting to grow again following some down years, 2010 saw a local Junior programme re-stablished, under the guiadnace of Richard Williams, who had been insrtumentual in the setting up of rthe club in 1992. HE now returned to run the Broadwater Bobcats, also based at the school, and which would in time become the official junior section of the club.

Following the BBF AGM at the end of Feb, the first item on the clubs calendar, was an umpiring clinic, lead by Darrin Mueller. A good turnout meant the club was going to have no shortage of volunteers to umpire games in future…..or at least that was the theory. This had been preceeded with the usual indoor pre-season at Broadwater school and participation in the Herts Spring League for 2010, where the Mavericks came up against the London Marauders, Richmond Dragons and the Sidewinders, before the season opened with a visit from Tonbridge 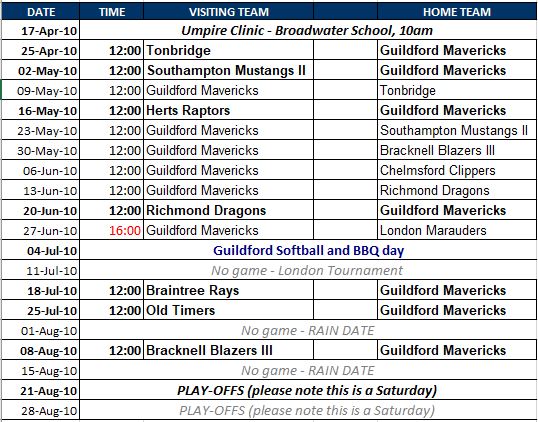