Sunday saw 20+ members of the club attend the Guildford Flames v Milton Keynes Lightning Ice Hockey game the Guildford Spectrum. A box was hired for the occasion, with a view looking directly down onto one of the two goals. The Flames, just like the Mavericks last season, top their division, and look like they are towards another title. 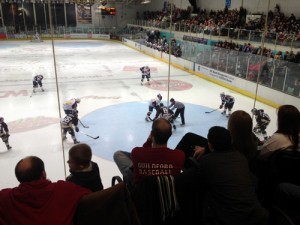 They took another step towards this, with a 7-1 on Sunday, scoring all their goals in the second period, despite having gone behind in the first period.

The event was organised by Mavericks and Flames season ticket holder, Dave Austin, although he felt he had to watch the majority of the game from his usual seat, rather than the luxury box. But as it turned out, the Mavericks were no jinx to the Flames, as they eased to victory.

With a near sellout crowd, and amenities such as Costa Coffee and bar right outside the back door of the box, the event proved a very successful social for the Mavericks first one of the 2013.

Next on the agenda, looks like being the Surrey Heat, although with both the basketball and Ice Hockey seasons coming to close, it may have to wait until after our 2013 season. But everyone had a good time, and this is definitely another outing that will be repeated