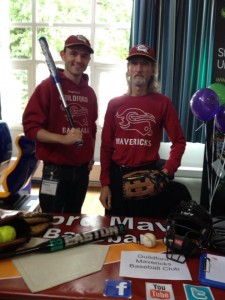 The Mavericks, in the shape of Will Frawley, Sheila Horncastle and David Jones, visited Merrist Wood on Thursday to run a stall at Guildford Colleges Freshers Fayre. Held within the main house on the Merrist Wood Campus, that stand attacted a lot of attention from students, and helped raised the profile of the Mavericks at Merrist Wood. In the past, various baseball and softball activities have been held their by the Mavericks and BSUK.

Merrist Wood is a 400-acre, multi-award winning College specialising in the land-based industries. Located three miles from Guildford town centre in Worplesdon, the College dates back as early as 1318. The indoor riding arena is one of the largest of any college in the country and a pre-Olympic training venue for the London 2012 Olympic Games. Merrist Wood is the home of both the Chelsea Ladies and Mens Football Academy.