Hello and welcome to Umpire’s Call. This week’s subject is Bases awarded to runners on overthrown balls and the like.

This often seems confusing, but needn’t be. DON’T OVERTHINK IT!

There are two situations when bases are awarded to the batter-runner or to other runners BY THE UMPIRE:

Let’s take Situation 1. first, as it’s the more common. The basic rule is: 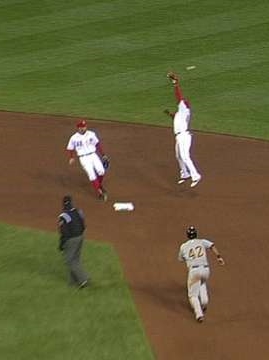 Now, the analytical among you might want to think of this a little differently, as:

Thus, you could think of it as, “2 bases” FROM TIME OF PITCH, EXCEPT if thrown by the pitcher from the pitching rubber.

A ground ball is hit, FIRST fielder to engage the ball overthrows it and ball goes out-of-play (CALLED BY THE UMPIRE) = 2 bases from time of pitch. Thus, batter-runner gets awarded 2nd Base. Any other runner gets 2 bases from the one he/she was on at the time of the pitch (i.e. 1 extra base: if there was a runner on 1st base, he/she goes to 3rd base; a runner on 2nd base goes Home.)

Pitcher tries a pick off (usually at 1st base), overthrows and ball is called dead: runner gets ONE base. OR, Pitcher throws a passed-pitch (catcher doesn’t catch it) and ball goes dead (e.g. under the backstop) : any runner on base gets ONE base.

This is a situation when a SECOND fielder is throwing a ball after another fielder has thrown or touched the ball, i.e. a second throw.

The bases awarded are now FROM THE TIME OF THE THROW.

This means that if — IN THE UMPIRE’S JUDGEMENT — a runner had reached a base by the time of this throw, he/she is awarded another base beyond that one already reached (which would in fact be 3 bases from the time of pitch).

Think about it — here is a likely scenario: Runner at 1st base (i.e. a double play [DP] situation for the infielders if 0 or 1 out). Ground ball hit to an infielder, who throws to 2nd base to catch that runner (let’s say the throw was on time and the runner is called out); fielder at 2nd base throws to 1st base for the DP on the batter-runner, but throws wild and UMPIRE calls out of play/dead ball. This was the SECOND fielder throw, so the batter-runner is awarded 2 bases FROM TIME OF THROW. So, if batter-runner had NOT reached 1st base, he/she gets 1st and 2nd base; HOWEVER, if the batter-runner was already at 1st base at the time of the throw (unlikely), he/she gets 2 bases from where he/she was at time of throw, i.e. 3rd base.

If you’ve read this far, here is a simplification that might help:

Except for a pitcher-thrown ball from/on the rubber, the award is ALWAYS 2 bases FROM THE TIME OF THE PITCH. Otherwise, it is 2 bases from the last base occupied/reached by the runner AT THE TIME OF THE THROW.

And here are the things fielders, runners, managers and coaches need to remember:­

There are some other situations where the Umpire will award runners more bases. These are called DELAYED LIVE BALL situations, when a fielder makes an illegal fielding attempt. Such situations are rare, because no ball player worth his or her salt would do any of the things listed below, now, would they?!

It is illegal for ANY fielder to:

• Touch, throw, hit or catch a BATTED (hit) ball with any equipment or clothing detached from your body (e.g. throwing your glove at the ball and hitting it; catching a fly ball with your baseball cap). These are NO-NOs.

• Touch, throw, hit or catch a THROWN ball with any equipment or clothing detached from your body. These are also NO-NOs.

• A cap or catcher’s mask in the hand is considered DETATCHED … so you CANNOT scoop up the ball with your cap or a catcher with his mask, trying to look dexterous!

DO remember that it is the UMPIRE’S JUDGEMENT whether that glove or cap came off your hand or head intentionally (i.e. was thrown at the ball). So don’t worry about your cap flying off when you make that spectacular diving fly-ball catch.

Just DON’T intentionally throw anything at the ball other than your whole body with an outstretched glove on your hand.

But these sorts of situations are extremely rare, so don’t worry about them unduly.

Any questions, just give the Doc a shout and I’ll sort it out for you.