General Manager Michael B has posted a query to me about a situation involving what appears to be fielder obstruction, so I thought this would a be a good forum to explain.

“A ruling question for you. If a runner on first runs into the first-baseman (1B), who is not fielding the ball, but is making his way back to the base in anticipation of a throw, I assume the runner is still awarded 2B. However, does any subsequent play (in that play) on the batter at 1B get negated — i.e. batter is given out at 1B? Or is that play on the batter not affected by the ruling on the runner going to 2B and so if batter is out at 1B, assuming the play puts them out?”

a) a runner ‘interferes’ with a play

b) a fielder ‘obstructs’ a runner

Michael’s question is a case of ‘Type B Obstruction’ — the runner has been obstructed by a fielder not making a play (yet). Thus, the ball is NOT out of play, is not ‘dead’ (which it is in a Type A obstruction situation). 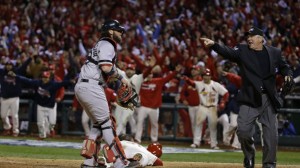 So in the situation Michael has described, the umpire calls ‘That’s obstruction’ (pointing at the first-baseman) [but NOT ‘Time’], and let’s the play continue. Once play has ended, the umpire then calls ‘Time’, assesses the situation and decides in his judgement where the runner(s) would have been, and awards bases accordingly.

So, in the situation described:

1. The runner who was on first base gets the free trip to 2B.

(Unlikely, but if the first-baseman were playing way to the right of his normal position and had obstructed the runner way over, more than half way to 2B, the umpire could even award the runner 3B on the basis that he would have easily made 2B and, in the umpire’s judgement, would even have made 3B when the fielder throwing the ball threw to 1B to try to get the batter-runner out.)

2. The batter-runner is out or safe just as the play transpired.

The important thing is that the umpire calls that there has been fielder obstruction of a runner, the play continues — no dead ball yet — and then assesses and awards according to his judgement of how far any runner(s) would have got if no obstruction had occurred. One of the things emphasised in umpire training is that there is no set number of bases to be awarded in most situations (contrary to some people trying to memorize absolute ‘rules of award’). Base awards in these situations are based on the umpire’s judgement of how far the runners would likely have got and on whether the situation is from the pitched ball or from a first (or second) thrown ball in play. We were taught that ‘when in doubt, stick to one base and don’t over-complicate the play’.