avericks up and running with a Big Bang in Brentwood

Following last week’s season opener against Richmond being postponed, the Mavericks finally got their 2015 season underway with a lengthy road trip over to Essex to face the Brentwood Bucks. In what was to be a marathon opening day battle, Guildford eventually emerged victorious after over four hours of keenly contested baseball in what was a great advertisement for UK baseball with plenty of offense on display from both teams. 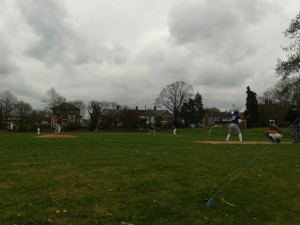 The Mavericks got off to a great start in the first inning with three runs, two of them courtesy of a 2 RBI triple from short-stop Ryan Hicks. The positive offensive performance was then supplemented by a solid outing on the mound from pitcher Rob Wheeler, who limited the Bucks to just the 1 run. Brentwood’s pitcher found his stride in the second inning, retiring the Mavericks in order as Rob Wheeler, Christian Schmidt and Chris Ward all struck out and in the bottom of the 2nd, Brentwood added some offense of their own, grinding out 5 runs to lead 6-3 by the end of the inning. This seemed to spark the Mavericks back into life as they amassed 10 runs in the top of the 3rd inning, the jewel in the crown being Christian Schmidt’s home-run deep to left-field, sparking jubilant scenes as the Mavericks bench emptied at home-plate to celebrate. Rob Wheeler then stepped back onto the mound and shut the Bucks offense before the Mavericks followed suit, retiring in order to start the fourth inning. Brentwood seized their opportunity to reduce the deficit by finding 5 runs in the bottom of the inning to come within 2 of Guildford at 13-11 after 4 innings of play.

The Mavericks added another run in the 5th inning, courtesy of an RBI from 2nd baseman Chris Ward before Brentwood clawed back another 2 runs to get within 1 with the score at 14-13 after 5 innings (and a couple of hours) of play. Guildford turned up the heat again in the 6th inning bringing home 6 runs, the highlight of which was the second home-run of the afternoon for the Mavericks, this time a 3 RBI smash to left-field coming courtesy of short-stop Ryan Hicks, building on his first and third inning triples and resulting in a 20-13 lead in the middle of the 6th. Refusing to admit defeat, a spirited rally from Brentwood had the scores level by the end of the inning as they found 7 runs of their own off of replacement Mavericks pitcher Tetsuro Shinkawa. 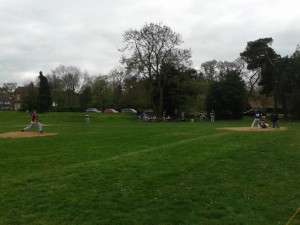 Maintaining their positive offensive display, Guildford smashed in another 3 runs in the seventh inning courtesy of third baseman Chris Lary, Tetsuro and some heads-up base running from replacement right-fielder Phill Nathan. A fourth run of the inning was controversially wiped out after Chris Ward ran across home plate but was deemed to have been tagged by the catcher. Once more, Brentwood rallied as they found another 3 runs to level the score at 23-23 after 7 innings. Another impressive performance from the mound by Brentwood’s pitcher (who would last the entire 9 innings) limited the Mavericks to adding just another one run in the 8th but the play of the top of the inning was a defensive one with the rookie Brentwood second baseman (#32) making a spectacular catch on a line-drive from Guildford left-fielder Scott McGrane, bringing an end to his perfect at-bat record for the day. A sterling defensive performance in the bottom of the eighth maintained the Mavericks’ lead before the offense added some major insurance in the top of the ninth inning, plating 7 times to take an unassailable 31-24 lead. The game ended on a blistering fastball from Tetsuro greeted with emphatic celebrations from the Mavericks team, seeing out a hard-fought and gruelling contest against a Brentwood team who simply wouldn’t go away and will be a tough adversary for their remaining opponents this season.

Next up for the Mavericks, a slightly more local road trip to Richmond this coming Sunday… 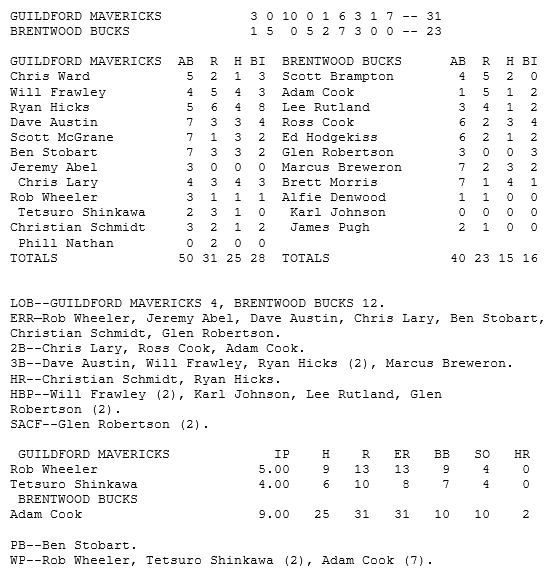 Guildford @ Richmond rearranged
Two in a row for Guildford