by Umpire David (aka ʻThe Docʼ)

In this post Iʼm going to cover three things:

Mea culpa! I was ʻconfidentʼ in telling people that it was against the rules to stop a legally hit baseball with the foot. I had reasoned that because there is a rule making it illegal to catch a baseball with your cap, your pocket or any other part of your clothing — like pulling out your jersey and using it as a net! — I thought that this would apply to the feet/shoe as well.

It does not. So letʼs be clear: it is perfectly legal to stop a fair ball with your foot, and even to kick it with your foot. (However, please read on!)

What you cannot do is, as stated above, use your cap or clothing in any way to catch a fly ball. The MLB rule states that you cannot stop or catch a baseball with any part or piece of your baseball clothing or kit when it is not in its normal place of wear.
Thus:
• you cannot throw your cap at a rolling ball to stop it;
• you cannot throw your glove at a ball, rolling or in the air, to stop it;
• and therefore, although not specifically stated, it follows that you cannot take off one of your baseball shoes and throw it at the ball to stop it;
• a catcher cannot use his mask to catch or stop a ball, either using it as a glove-like
tool, or throwing it at a ball, or using it as a trap to stop the ball —for when taken
off, the mask is no longer where it normally needs to be worn. (Obviously, if a
catcher misses a pitched ball and it smacks into his mask when on, and that stops
a pass ball, thatʼs OK.)
• The above applies if deliberately/intentionally done. If your glove flies off your hand
when attempting to field a ball and hits the ball, or if a cather ʻthrows his mask offʼ
to chase a missed pitch and it happens to fly back and come into contact with the
ball (unlikely but possible), and thus in the Umpireʼs judgment was an intentional
action, then youʼre OK.

• use your shoe/foot to stop a ball (theoretically, either a rolling ball, or even sticking
out your foot to stop a fly ball!);
• and it is OK for an infielder to kick a rolling foul ball right near a baseline to ensure it
is foul/stays/goes foul before passing 1st or 3rd base and is called a foul ball by
the Umpire;
• but remember, once a rolling ball has touched fair ground in any part of the field, or
any part of 1st or 3rd base and then rolls foul as it enters the outfield, it is a fair
ball and must be played. So, if a ball is rolling foul, veers into fair territory— even
several times back and forth — the crucial factor is whether it is in fair territory
when it passes 1st or 3rd base, or bumps against 1st or 3rd base.
• The Umpire will not call ʻfoul ballʼ until he or she has seen that the ball has settled
on foul territory or been touched by a fielder in foul territory BEFORE it has

passed 1st or 3rd base. (Thatʼs why itʼs a good idea for a fielder to knock the ball
with hand or glove or foot away from the 1st or 3rd base line farther into foul
territory if the ball is rolling very close to the line. That way there is no question
that the ball was on the line, especially as the Umpire would not have called it foul
yet when it has not passed or settled in foul territory before 1st or 3rd base.)
Now, please read on:
It is normally NOT a good idea to try to play footsie with a baseball. This is a piece of
coaching advice.
If a ball is rolling fast you might be tempted to stick your foot out to stop it. If you
miscalculate, however, and land on the ball, youʼre likely in for a serious injury — a
pulled muscle or even a broken ankle. If the ball takes a shallow hop and hits your
anklebone or shin it might cause injury.
If in the outfield you can lunge on your posterior and slide with outstretched leg to
stop a rolling ball from getting past you, then that might be a good move. But
consider other factors in deciding your move: you should have a fellow outfielder out
there backing you up; it might be better to lunge arm outstretch to catch/stop the ball
— that way youʼre in a better posture to get up and readier to throw back into your
cutoff or infield team mate.
If the ball is close enough to you on or near the ground to theoretically reach with
your foot, it is recommended that you try to field the ball with your glove. This is why
we do drills at ʻbackhandingʼ the ball by reaching across your body on your off-gloveside
or ʻdivingʼ to your glove-side to stop a ball that you cannot get in front of or body
block.

A Baseball Umpire is the person in official charge of the game, including beginning and ending the game, enforcing the rules of the game and the grounds, making judgment calls on plays, and handling any disciplinary actions. The term is often shortened to the more familiar form ʻUmpʼ; and, in amateur baseball an umpire is often addressed as ʻBlueʼ, owing to the common/traditional colour of the umpireʼs uniform (blue shirt or jacket, with mid-grey trousers/pants — although note that these days we also sport black shirts, or light blue, or red, or cream … — basically trying to contrast with the players so as not to possibly confuse them in play. We like to make
a fashion statement as well as you uniformed players, you know!).

However, in professional baseball, the term ʻBlueʼ is seldom used by players or managers. In pro-ball an umpire is more usually addressed by name (or as ʻMr Umpireʼ, apparently, by South Africans 🙂 ).

Some interesting history: Although games were often officiated by a single umpire in baseballʼs early years, since the beginning of the 20th century officiating has been commonly divided among several umpires, who form the ʻumpiring crewʼ. Other umpires are called ʻbase umpiresʼ and are commonly stationed near the bases; ʻfield umpireʼ is also sometimes used, but is less common. When two umpires are used, the second umpire is simply the ʻbase umpireʼ. This umpire will make most calls concerning runners on the bases and nearby plays, as well as in the middle of the outfield.

3. Why was that called a strike?

OK, we all know what the strike zone is, yeh? 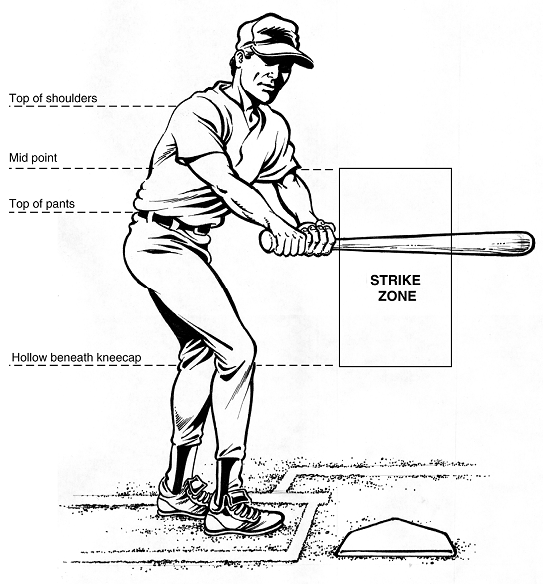 Well, letʼs get this absolutely clear. When asked, most will say that it is a pitched ball that passes over the home plate between imaginary lines straight up from the edges of the plate and between horizontal lines between the batterʼs knees and about a line across the chest just below the armpits. Right and Wrong! Itʼs a bit more complicated than this.

“The STRIKE ZONE is that area over home plate the upper limit of which is a horizontal line at the midpoint between the top of the shoulders and the top of the uniform pants, and the lower level is a line at the hollow beneath the kneecap. The strike zone shall be determined from the batterʼs stance as the batter is prepared to
swing at a pitched ball.”

So, the upper limit is not really ʻabout the armpitsʼ, but rather a little lower in fact. Umpires probably tend to use the letters of the jersey as a good focus point as they are about in the right place, although it should be the bottoms of the letters (despite the sometimes used phrase ʻacross the lettersʼ).

But, re-read that MLB definition. Note that it is ʻover home plateʼ. This means the whole plate, not just the front of it. The strike zone is not only a planar, rectangular box; it is a three-dimensional area — a five-sided column the top and bottom of which is determined as described above, and the depth of which is determined by the vertical planes coming up from the five sides of home plate. And, equally, those little black border strips around home plate are also part of this, for it is the outside border of the black that is the limit of this five-sided column. And note that the zone is determined by the batterʼs stance ready to swing. (Observant and altitudinally challenged players will readily see that this gives a certain advantage to some batters over others, for their strike zones will differ.)

We all know about the curve ball, that fabulous little trajectory in which the ball looks like it is heading to reach the plate outside the strike zone on one side or the other to the batter (right-handed or left-handed), but then actually arcs around in the horizontal or near horizontal plane and passes into the strike zone over home plate.
Thus beware of backing off seemingly inside pitches too soon. Another pitched ball can look quite high coming in — the ʻdrop-ballʼ in my day, but now probably more commonly called a ʻchange-upʼ pitch, as the ʻdrop ballʼ pitch is a
specific fast-pitch softball pitching term. Nevertheless, this pitch is slower than the ʻfast ballʼ and tends to appear to come in high. Batters often leave such a pitch, or swing too eagerly/too soon and under the ball, or even before it reaches the plate. If pitched well, this type of pitch will look high and then drop into the strike zone at the
back portion of the five-sided column described above.

All this explains why the Plate Umpire, to do his or her job properly, has to be crouched down in that close position behind the catcher and, just like the batter, ʻwatch the ball all the way inʼ.