The Richmond Dukes travelled to Guildford on Sunday to take on the Mavericks at Christ’s College.

Phill Nathan made his first start at Shortstop for the Mavericks, injured Adam Courtney patrolling right field and Guildford Junior, Tom Sullivan being called up to start on the bench.

Rob Wheeler took up a familiar position on the mound for the Mavericks but it was the the top of the order doing some damage early on plating 3 runs before Rob steadied the ship inducting a pop up from Dukes clean-up hitter Toky before striking out the next batter and inducing a weak ground ball to close out the top of the 1st. The top of the Mavericks order were in good form and drew ahead 4-3 after some good plate discipline and a timely hit from Wheeler to move into the 2nd inning.

Richmond regained the lead in the 2nd plating 5 runs whilst the Mavericks could only plate 3 and in the top of the 3rd the Dukes extended their lead in emphatic style after Wheeler struggled to get the calls from blue, walking the Dukes 9, 1 and 2 hitters, Ben stepped up and crushed a curve balls sending it beyond Kane Turbitt-Lewis in left field and over the fence for a grand-slam.

Veteran Wheeler handed the ball to Mat Heydenrych to make his debut on the mound for the Mavericks. Heydenrych made quite the entrance, striking out the first batter he faced before giving up 3 runs to make the score 14-8 to the Dukes after the Mavericks offence could only muster one run. 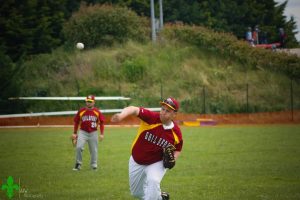 From then on, the game changed. The Mavericks walked, stole and hit with ease whilst Heydenrych settled into a stride striking out 4 along the way. After the 6th, the Mavericks had taken the lead 17-15 and didn’t fall behind again. After Heydenrych had expended all his energy during a stellar pitching performance, he came out of the game to be replaced by Tom Sullivan who had waited patiently for his debut. Edgar Simbajon swapped catchers gear for the game ball, starting third baseman Dayne Turbitt came in to catch, Kane Turbitt-Lewis to take over at thirdand Sullivan going to left field. Simbajon made short work of the bottom of the Dukes order.

In the 8th, Sullivan was called on early and showed incredible range, tracking down a fly ball in the gap, making a fantastic catch and robbing big hitting Duke, Toky of a sure double.

It was a long day but a good day for the Mavericks who ended the game victorious after Richmond failed to score in the 9th with the Mavericks leading 15-31.

A note of thanks to our good friend Jeremy at JJW Photography for the taking photos which can be found on his page.